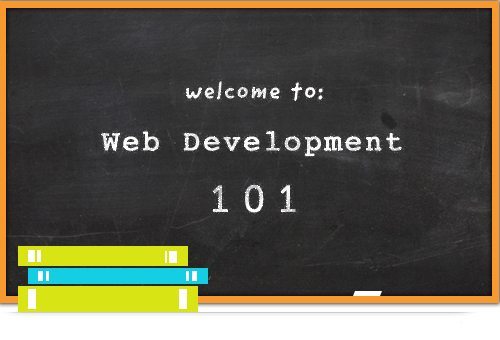 So, you’ve got a great design idea for a new website, and you’re ready to take it to a developer. Or so you think. The developer looks at your mockups, and he’s got a few questions. Will it use jQuery for animations? How will drop-down menus behave? What will be your links’ hover states and rollover styles?

If your answer to these questions is, “uhhh…” (or anything similar), listen up. If you’re designing for the web, it doesn’t matter whether you’re doing the actual coding. Knowing at least a little about the world of web development is now officially part of your job.

Your design files should allow a developer to easily pick your design apart, build it, and take it live. To do this, you need to speak developers’ language—so you can explain exactly what you want them to do.

Why’s this so important? Because if you aren’t clear about how you want things to look, certain features won’t be built into the live site. (I learned this one the hard way.) But knowing the basics of web development means you can communicate clearly. And that will make your life—and the developer’s life—a whole lot easier.

At a minimum, here’s what you need to know.

• Get some basic CSS3 know-how. Gradients, buttons, drop shadows, and even basic shapes and rounded corners can be built with CSS. And using CSS instead of images cuts down on the size of a site—meaning faster loading time. Design visual elements that can be reproduced in CSS (rather than creating clunky image files), and developers will thank you for it.

• Use standard fonts. Choose fonts from Typekit, Google Web Fonts, or another major font directory. Again, if you choose a font that isn’t common on most browsers, your type will have to be displayed as an image, meaning slower loading times—and frustrated developers.

• Go easy on the backgrounds. The same goes for webpage backgrounds. Go for a solid color—or a small image or texture that can be easily repeated. This will also help cut loading times.

• Be careful with images. If you’re a designer, Photoshop is probably your thing. Here’s a tip for sharing images with web developers: Use the Pen Tool to cut out all images that will need a transparent background, instead of using blend modes. If the developer goes to save the image and you used a blend mode, it’ll show up on the live site with one of those ugly, patchy backgrounds. Don’t let this happen to you.

• Keep responsive features in mind. As some screens get bigger, while others get tinier, you need to make sure your design can easily adjust to different browser sizes—or appear in a totally different configuration based on the device it’s viewed on. So make sure design elements can be resized easily or simplified for faster viewing on mobile platforms. But don’t forget a high-res photo for full-width banner images—that way, it won’t get pixelated if viewed on a huge screen.

And where can a designer learn development basics—fast? You can’t learn to code overnight, but sites like Codecademy and Smashing Magazine are a great place to start. Another cool trick I’ve learned: find a site you like, and peek at its code using the Inspect tool in Chrome or Firefox. Just right-click on an element, click “Inspect,” and voila—learn any site’s coding secrets!

Soon, you’ll be throwing around terms like “cell padding” and “pseudo-class selectors” with ease. And you’ll be happy seeing your design creations come to life—just the way you imagined them.

Want to see what our designers are capable of? Contact Atomic, and we’ll give you all we’ve got.

Website redesign: Read if you dare
Scroll to top